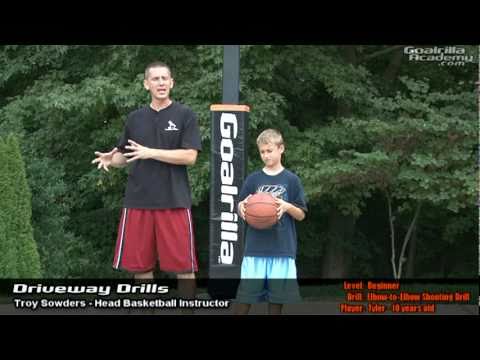 Fatigue is a real thing in basketball for players at all levels. Think back to the 2011 playoffs when LeBron James stats starting dropping game by game. He appeared winded and questions about fatigue starting to surface.

Even for ballers who are kids learning the fundamentals, all the youthful energy after hard play and needs to be replenished. Building endurance is one of the top priorities for coaches of kids’ teams. That’s why drills so often focus on consistent movement. Even for short 1 – 3 minute drills, pressing with full on intensity is tiring – and builds endurance practice after practice.

The Elbow-to-Elbow Shooting Drill is no different for beginners in that regard. One-and-a-half to two minutes at full tilt getting in as many fundamentally correct jumpshots, alternating elbow to elbow is tough.

The drill begins under basketball goal. The player tosses the ball out toward the nearest elbow, follows it, catching it, pivots and executes a jumpshot. He retrieves the ball and repeats to the opposite elbow. For the next 1-and-a-half to two minutes, the player alternates between elbows in this manner.

For beginners, adjusting the height downward to the most appropriate level on the Goalrilla Goal Basketball hoop helps. It adjusts anywhere from 7.5 to 10 feet. That in itself reduces the fatigue and allows for the execution of fundamentally correct jumpshots.

In this drill, it is usually about halfway through that the player starts to exhibit evidence of fatigue:

The key here is to continue with consistent movement and have the player squeeze in after the pivot – taking a step or two closer to the hoop. The coaches’ job is to push the player into getting his legs underneath him and to execute the jump shot properly – tired or not.

All of us here at the Basketball Goal Store are happy to explain the features of the Goalrilla Goal Basketball system because we know that each of the features – like the adjustable height – have been designed into the Goalrilla Goal for good reasons that are of benefit to players. Being the largest online retailer, we’ve answered just about every question that comes up!

Help your beginner get started on the right foot to build skills and endurance – with a Goalrilla Goal on your own home court.