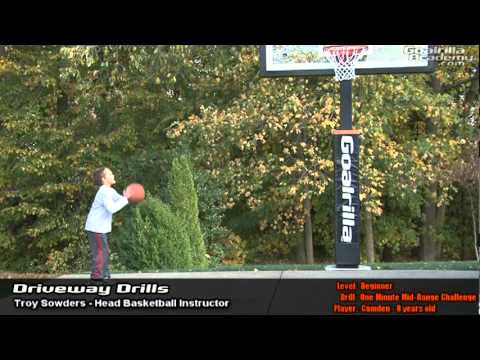 The One-Minute Mid-Range Shooting Challenge is just that for intermediate and advanced players. But for beginners, it can be modified to be a great all-around drill to work on several different skills:

For starters, as a beginner’s coach, eliminate the one-minute goal. The goal for beginners with this drill is to:

Since beginners are usually younger and smaller in stature, it will be important to make the basketball goal an appropriate height. With a Goalrilla Goal Basketball Goal, this is easy. Simply turn the actuator and set the height anywhere between 7.5 and 10 feet, depending on the height of the player. (As a side note, the height adjustment feature is one of the most popular from what we hear here at the Basketball Goal Store. Parents with children of various ages really appreciate that it’s not one size fits all, it’s one goal fits everyone’s needs!)

You will also adjust the distance from the basketball rim, bringing the player a bit closer in all the five positions. Because the player will be concentrating on the drill, it would be a good idea to mark the positions with something like a tape “x” or with a chalk “x.”

The player only moves from one position to the next once the basket is made. That may mean several attempts, which can be frustrating and lead the player into hurrying and not really setting a fundamentally sound stance before shooting the ball. Remind the player to take his time, set his feet, stay with it and to not rush.

With more and more implementation, the player will develop better shooting skills and learn to not travel as much. It’s all about getting better and better – more proficient and more confident.

Measure progress by counting the attempts to make a basket and watching the number decrease as the player becomes more proficient.