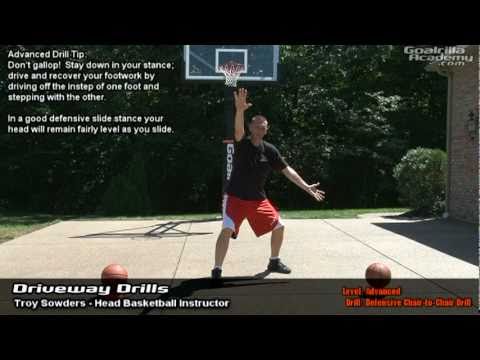 You can run the height on the Goalrilla Goal Basketball Goal in your home court all the way up to the 10-foot maximum because you won’t need the basketball or hoop for this drill. (Just keep it handy for a some practice some baskets if you have the energy left when you’re done with this drill.)

Two aspects of playing basketball are critical: skills and endurance. Every player needs to have solid fundamental skills to really be good on the court and making good use of the basketball goal. You know the players that are great – until the end of the game when they just run out of steam and can’t make those last-second drives and score the points. It takes both skill and endurance to really excel.

The Defensive Chair-to-Chair Drill works the player in two ways:

The drill is simple as far as what is to be done, but there are a few things to remember and really pay attention to:

Here at the Basketball Goal Store we can imagine parents setting this drill up after a long day at school so the kids have some intense, focused exercise to wear off some of the stored-up energy they bring home on the school bus – plus building some skill and endurance!