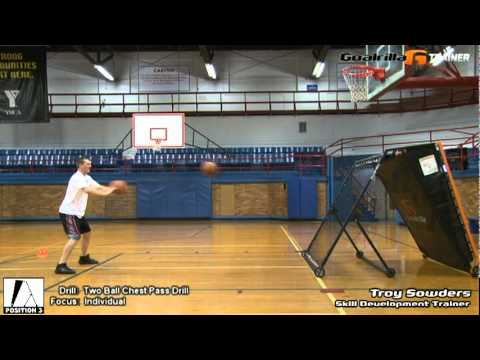 In this video, basketball players are going to have set basketball goals of improving on their chest pass skills. By placing the Goalrilla G Trainer below the basketball goal, and standing at the free throw line (up to the 3 point line), players are going to use two basketballs, and are going to work on speed passing, chest passing, strength, and coordination. With a continual flow, fast pace, and non stop movement, not only does this provide a great cardio workout while using the G Trainer, it is also going to allow players to work on perfecting the chest pass, both in passing as well as in receiving the pass, even if it is not delivered perfectly during a game.

The Goalrilla Basketball Goals that players will be working on with this video include:

– Cardio training, and quick paced movement, for a period of 30 to 60 seconds.
– Chest passing.
– Players can work on distance, accuracy, range of motion, and throwing off passes, by moving closer or further away, and side to side while making their passes.
– Fast paced movements, and continual passing are going to help fatigue the arms, so players are going to have more strength, and a better passing motion during a game; and,
– Players will work on continual movement, along with accuracy training basketball goals, when using the G Trainer to do these drills.

Since you are constantly moving, and since it is a fast paced return, you have to make a quick chest pass, in order to properly do this basketball drill. Therefore, it is more challenging than working with another player or a coach, because you never know which angle the ball is going to bounce at when returning, or how quickly it is going to return to you, when working with two balls rather than just one while doing the drill.

Great passing, especially delivering an excellent chest pass, is an integral part of any basketball player’s game. You have to be able to deliver a sharp and crisp pass, whether it is in transition during a fast break, or whether it is in half court ball, when playing one on one or against a zone. The better the delivery, the better the chance a teammate is going to receive, and be able to get off the shot in a timely manner, rather than have to scramble for a poorly delivered pass during a game, which can result in loss of the ball or loss of points.

When you are working with the Goalrilla G Trainer, this drill is going to allow you to work on tempo, perfect angles, fast and crisp passing, and improving the delivery, as well as learning how to receive a chest pass, even if it is not perfectly delivered to you. Basketball players, who want to improve their overall basketball game, have more assists during a game, and improve the overall level of play for their team, will love this basketball drill, and the quick paced action that it delivers, because you are working with two balls rather than just one.