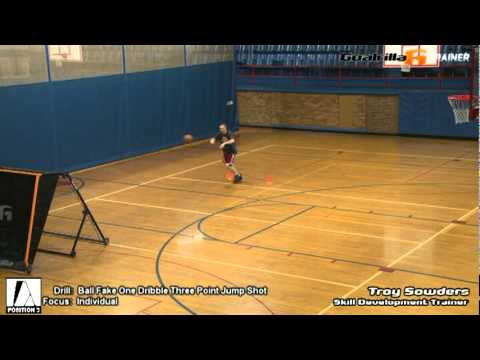 Using the Goalrilla G Trainer, the player will work on several offensive skills including:

1. The chest pass execution and squaring the shoulders to receive the chest pass off the trainer.
2. The head fake without taking a dribble.
3. Single dribble left and single dribble right, followed by a three pointer. By executing the drill with both hands, the offensive player will feel more comfortable in a game situation, regardless of which side they see an opening on.
4. The basketball player is working on their three point/distance game.

By executing this drill properly, the head fake will take one defender out of action, resulting in 5 on 4. If the player finds a teammate cutting to the basketball goal, he or she can choose to deliver a pass from the three point line in order to get an open layup. This drill shows players a different way to look at the court during a game. Although the basketball drill is designed to practice the three point jump shot, the offensive player may pass or take the shot if open.