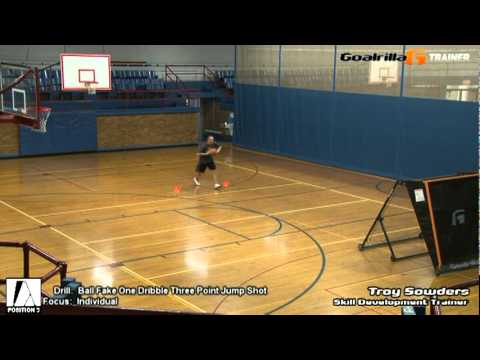 This basketball drill incorporates the chest pass, ball fake, and dribble/drive to the basketball hoop. It is a simple half court drill that helps the offensive player focus on all aspects of their offensive play. The basketball drill makes the player practice their ball fake, while keeping the pivot foot planted. The drill not only works the offensive skill set, but also forces the player to think quickly on their feet, which is what has to be done in game time situations.

This is a great drill using the Goalrilla G Trainer, because it incorporates all aspects of the offense. It teaches players how to properly set up a fake without dribbling the ball. By receiving the pass and immediately faking, this is going to allow the player to pick up and dribble without being called for a travel. In addition, with the quick head fake, the player is going to be able to see which side of the court opens up. With the lane open, the player will have a clear path to go either left or right to drive in for the layup.