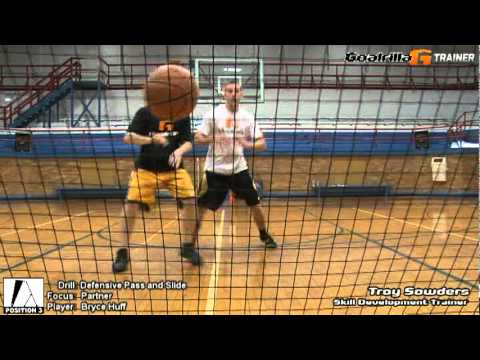 In this video, the Goalrilla G Trainer goal is used between two players that are focusing on both defense and offensive skills. In the lower stance, and circling around one another, players are practicing the shuffle motion for proper defense, and quick paced movement that is expected during a basketball game. With the chest pass drills, basketball players are also working on offensive drills with this passing session, as they are working on both delivery of the ball, and on receiving a pass when they are moving at a quick pace, and might be confronted by a defensive player on the court.

With the Goalrilla G Trainer, the two players are:

This basketball drill not only focuses on defense and offense, it is also a great cardio movement, as it is a very fast paced set, and is done as an interval training set, helping build coordination, foot speed, and thigh muscle strength.

In this basketball drill using the Goalrilla G Trainer, the players also have to have a great deal of teamwork, which is something that is necessary on the court. Not only do they have to believe their teammate is going to deliver the chest pass properly, they also have to work together to make sure neither one falls over, moving and circling each other, in a quick pace. So, the basketball players are going to be gaining confidence in each other, they are specifically focusing on quick and short movements, and they are working together, in order to deliver the passes, and in order to keep a constant flow while they are working on the drill.

With quick, short movements, this is going to eliminate monotonous passing drills that basketball players and coaches have used in the past. The G Trainer allows players to go at a much faster pace, and go for a shorter period of time on the drills they are doing, yet still get a far more intense workout. This specific video drill displays just that. So, as a coach, when working on basketball pass drills, foot and eye coordination, passing and receiving, as well as a defensive stance, the Goalrilla G Trainer is not only going to make training simpler, they are also going to allow basketball players to work on several skills, while doing a couple of simple and basic motions.