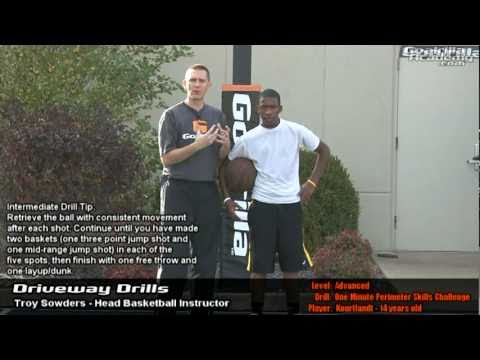 Mastering the fundamentals of perimeter shooting takes time – and practice. And, once a player has developed good skills, there is still work to be done.

It takes more time, effort and practice. If you are an intermediate to advanced level player, try this drill that will challenge you and help you become more proficient on the basketball court – and valuable to your team.

It’s great because you can practice on your own – even on your Goalrilla Basketball Goal home court!

1.       The player starts with the basketball under the basket. Set the clock to 1 minute.

2.       The player tosses the basketball toward the corner, at the 3-point line, with a backspin on the ball.

3.       The player will run, following the toss of the ball, catch it and execute a proper catch and pivot move, step into their shooting rhythm and execute a 3-point jump shot by shooting the ball into the basket.

The player repeats this process until he has made one 3-point jump shot from the corner position.

The player then retrieves the ball and continues the process only tossing the ball to the mid-range distance. He repeats the process until he makes a mid-range jump shot.

Then the player switches sides and runs the complete drill again from the opposite side.

Once he has made the last basket, he sprints to the free throw line and executes a free throw.

After the free throw is made successfully, the player retrieves the basketball, sprints to either free throw elbow line with the basketball while performing a speed dribble, then pivots and finishes the drill with a layup or dunk.

The goal – or – what makes it tough

The goal is to complete the entire drill within 1 (yes, one) minute. That means you must attack it with game – like intensity. You must remain under control with each shot; maintained by being relaxed and landing safely.

It’s good to focus more on form and shot execution than the ticking clock.

Completing the drill in 1 minute is a real challenge. Use your overage as the motivator – work to shave off time in your next attempt as you work to better your shooting percentage.

Give us a call here at the Basketball Goal Store at (800) 689-0281 if you want to learn more about Goalrilla Basketball Goal systems for your home, where players can take the one minute challenge whenever they want.