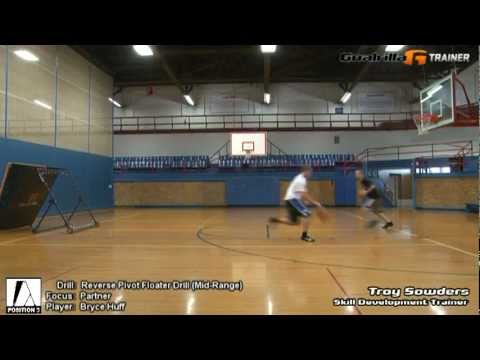 For this drill, the Goalrilla G Trainer is going to be set up just above the three point line and both players are going to begin directly below the basketball goal, facing the trainer. The first player will dribble towards the trainer and will deliver a chest pass after taking a couple of dribbles. The first player will continue to move towards the Goalrilla G Trainer and will receive the pass at about the free throw line. After the pass is caught, the player will take a reverse spin off of their pivot foot and will dribble towards the basketball hoop for the layup. The second player is going to begin the same series of steps, once the first player is making their pivot and beginning to dribble in for the layup.

This drill works best if once the pass is received off the Goalrilla G Trainer, each of the two players alternate which foot is their pivot foot. The first player will turn right and the second player will pivot to the left to drive towards the basketball goal. In order for each player to work on both hands and pivoting of both feet, the next series the player will start with the opposite hand/foot. By doing this, both players will work on dribbling, driving and finishing with a layup drive with both the left and the right hand. As a result, the player will work both hands and will improve their ability to drive to either side of the basketball goal.

Using the Goalrilla G Trainer and incorporating two players, this drill will help work on control, pace and communication. It is important that both players keep their eye on one another. As they move towards the Trainer, each player will have to effectively communicate to the other. Otherwise, the drill is going to fall apart and the players are going to end up running into one another. This is a great drill to improve a player’s timing and communication skills. This drill also teaches players how to properly plant their pivot foot. Once the pass is caught, the first foot that lands should be the pivot foot. After receiving the pass, no dribble is taken until the player steps off the other foot and drives towards the basketball hoop for a layup.