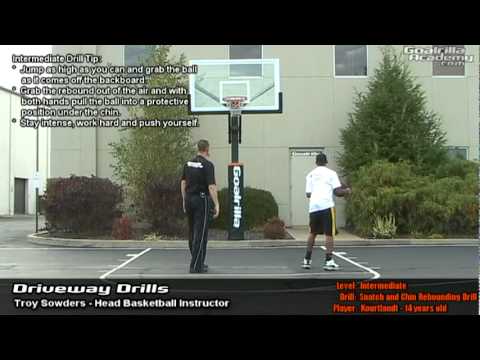 Immediately after the school bus pulls away I hear the familiar twap-twap of a basketball dribble on the home basketball court next door. (Backyard basketball courts are a blessing for families because everyone, regardless of age or ability, can have fun – and get exercise – with an adjustable Goalrilla Basketball Goal. Basketball Goal Store has a huge stock ready for delivery.

Today, mixed in with the twap-twap-twap was a seemingly heated “discussion,” but all I could catch was “Michael Jordan.”

When I remember Michael Jordan, I always think of two things:

MJ’s leaps were unbelievable and no one can dispute he was an aggressive player. One of the drills I want to share definitely has that Michael Jordan aura about it:

The Snatch and Chin Rebounding Drill

The goal is for the player to excecute 10 repetitions from the right side of the basket and then move to the left side and repeat tossing with the left hand for 10 reps. One set is 10 reps on each side and the player should execute 2 – 3 sets.

Another important aspect of the drill is maintaining the pivot foot position. With a good pivot foot, you will be able to pivot and keep your backside toward the opponent as you secure the rebound and maintain possession of the ball.

Like I said, this is a “This is mine!” drill – match it with the same attitude, air and aggression.